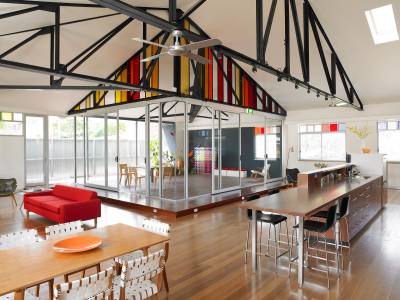 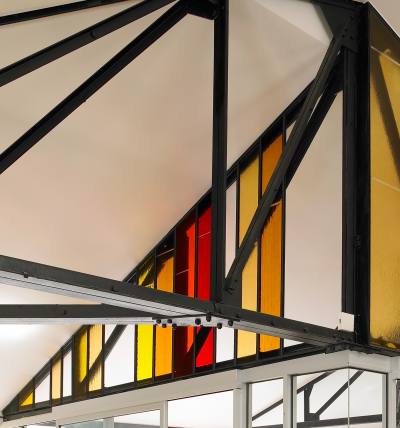 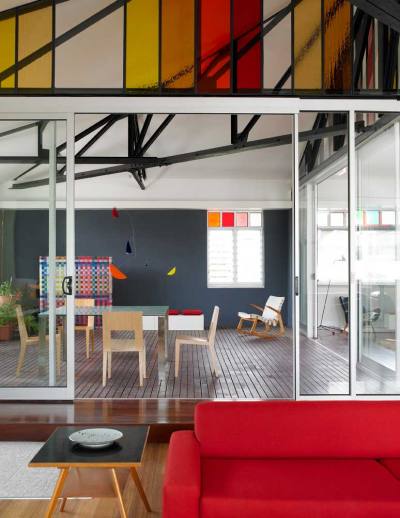 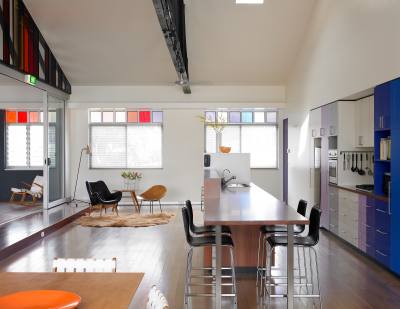 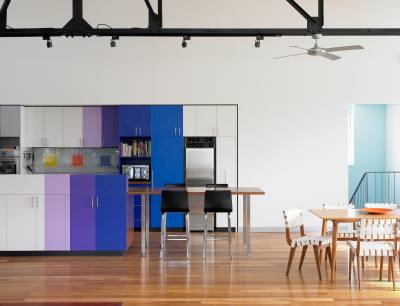 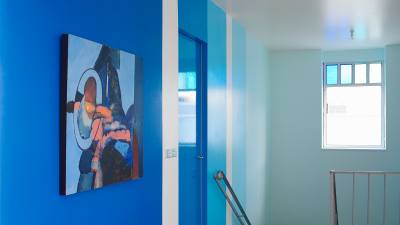 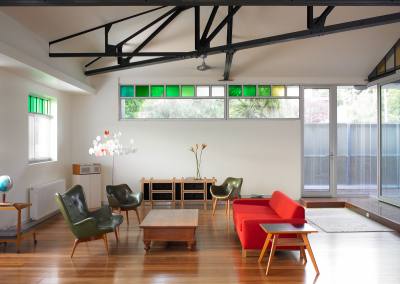 The 300-square-metre warehouse floats directly over ground-level studios occupied by artists and industrial designers. The warehouse is connected to the studios via an internal staircase, as well as benefiting from its own street address. Once used as a manufacturing headquarters, the original space was sparse. ‘After the ceiling panels were removed, you could appreciate the volume,’ says Young, pointing out the 5-metre raked ceiling.

With no garden access and almost too much space for a couple, a decision was made to create an indoor-outdoor garden. Adjacent to the entrance and open to the sky, the courtyard acts as a light well for the warehouse-style apartment. Framed by floor-to-ceiling glass sliding doors, this courtyard also provided an opportunity to introduce colour into the design. ‘Colour was one of the few words mentioned in the brief. But when I started to show colour samples they simply couldn’t decide,’ says Young. As a result, most of the colours selected by the clients were incorporated into a kaleidoscope of stained glass, both in the courtyard and in the windowpanes. With natural light coming through the glass, the apartment is continually animated with colour.

The kitchen joinery is also colourful. Made from laminate, each cupboard is a different colour, ranging from blues to mauves. Original brushbox timber on the floor has been restored and polished. A built-in timber table extends from the kitchen’s island bench. The table height can be adjusted with the use of a second pair of steel legs, which are kept in a kitchen cupboard. ‘It can be used as a dining table or elevated to create a cocktail bench,’ says Young.

As part of the brief was to create open-plan spaces, the only enclosed rooms are two bedrooms, including the main bedroom, two ensuite bathrooms, a shared dressing area and laundry. The bathroom walls already existed so there was little point in repositioning the plumbing. Apart from the removal of the ceiling and the insertion of a couple of skylights, the 1950s-style warehouse has been lightly touched. Original floors have been polished and damaged terrazzo is now concealed beneath the deck to the courtyard. ‘Sometimes the best solutions are the simple ones. Peter and I aim to create zero waste. We often utilise off-cuts from new and recycled materials, particularly if they can be organised into an interesting design feature’, says Young.