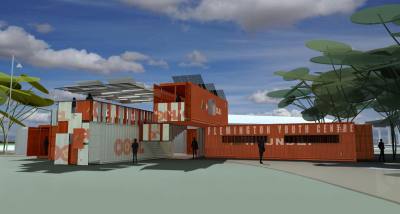 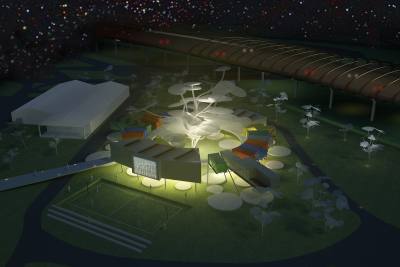 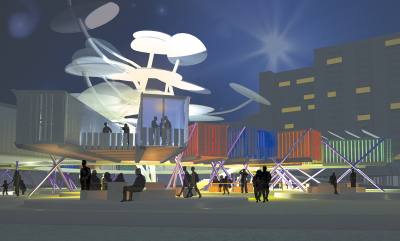 The design is informed by Skinners Playground … fabricated from old shipping containers, but Ho notes important differences between them. The intended users of the Flemington design, for example, are teenagers and young adults who require services with far more breadth and depth … Sudanese – Australians can congregate outdoors as they had traditionally, while volumes are devoted to compartmentalised functions such as athletics, job training, and meal preparation. The cooking courses are a vital component of the scheme, Ho says. “There is no discrimination with food. It celebrates family heritage and cultural diversity.”

Although the Youth Centre should attract crowds, the structure itself treads lightly on the city. Rainwater cisterns as well as photovoltaic and solar hot water panels minimise resource consumption, the site plan preserves trees, and film screenings on the exterior of one shipping container offer an amenity to the wider neighbourhood. “The facility takes a good neighbourhood approach,” Ho notes. “It is a place that breaks down the stigma that local public housing is separate and foreign, and invites all members of the community to be part of it.”