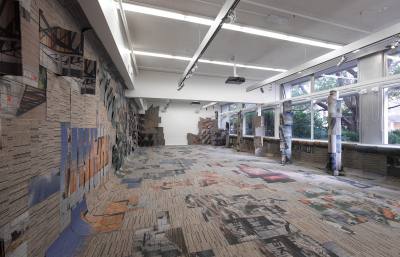 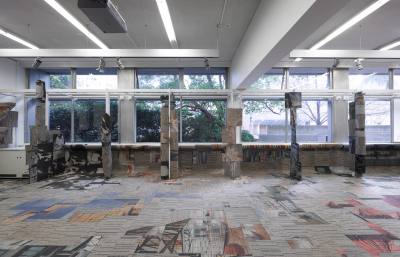 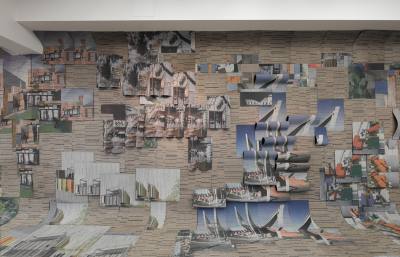 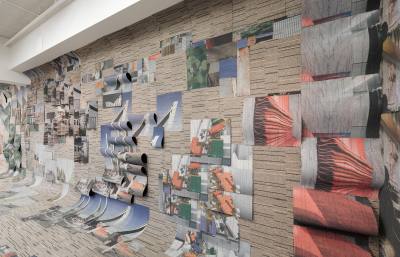 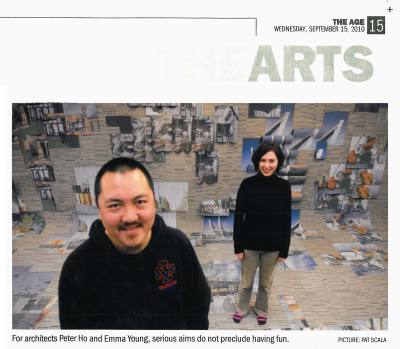 An exhibition of works by PHOOEY Architects
Presented as part of the ABP Alumni Retrospective Series
3 September to 1 October 2010
Wunderlich Gallery, Architecture Building, The University of Melbourne

PHOOEY is a small Melbourne firm of architects whose directors are Peter Ho and Emma Young. The letters in the firm’s name come from the director’s names and initials, and, with an extra letter, construct a saucy name that combines attitude and easy recognition, against the plethora of vowel-free acronyms that identify many architectural firms today. The name also suggests that the firm’s work is exploratory and lateral, and that Ho and Young and their team bring a different approach to problems and embrace issues that other architects do not even consider. This is clear from PHOOEY’s work, and is a major reason for its inclusion in this series of exhibitions by Faculty alumni at the Wunderlich Gallery.

As might be expected, PHOOEY has taken this exhibition as an opportunity to examine what they have been up to. But rather than use the gallery as a room in which to display a record of things made elsewhere, they have done to the space what they might do with another commission. In the discourse that sustains ‘art gallery’, this exhibition could be seen as an installation, in which the particular attributes of a space are exploited by an artist to create the work, and where the work, being so particular, cannot be reinstalled in any other kind of space. This is an idea that the visual arts have borrowed from architecture’s concern for the particular site, so it seems right for an architectural appropriation of a gallery to treat it as such.

In this installation, the architectural projects are printed as images into the carpet tiles, and distributed as if they were footnotes. The projects include the by-now famous (or perhaps notorious) projects which use shipping containers. They also include PHOOEY’s first works such as the Zedi Hair Salon and the Stick House, both from 2004, school and community buildings since then, and current projects such as a high-rise ‘container’ apartment block in West Melbourne, and the recently premiated design for bicycle shelters at Melbourne railway stations. How do these footnotes, then, illuminate the main text, which is the carpet tile installation? What in these projects points to the way that the Wunderlich gallery has been modified, or, to put it the other way: what in the installation provides a guide to the issues that inform PHOOEY’s architecture?

One of these issues concerns materials – building materials. Hardly any material on a usual building site comes from that site. All is delivered from somewhere else. To do so, it has to be packaged and handled at the point of manufacture, at the building site and often in between. Brick is not clay, but a tightly bound palette of highly processed units, timber is not wood but a standardised pack of milled lengths, and so on through all of the products that assemble into a building.

The industrialisation of building – that great modernist dream of making buildings like cars or trucks – has in fact occurred through the mass production of components and sub-systems. Instead of being made to order, the market-based economy ensures that there is either too little or too much produced. For dearth and glut, recycling is only a partial answer. PHOOEY’s works face these questions: what would happen if we were to use all of the materials delivered to a building site? Maybe even all of the packaging? And what about using up the glut?

For many projects, however, there is material already on the site: the existing building. The conversion of a building into architecture has been the staple project for quite a few generations of young architects now and it has run its course through utopian machines, heritage overlays and lifestyle settings. All of these have tended to use the existing building as an armature but rarely as potential material. So a further question that PHOOEY’s works pose is: what is the potential of using the existing material, not just for prosaic construction, but for architectural composition?

Both of these issues – using everything that arrives, and using things that are already there – have some connection to fine art strategies of collage, found object and assemblage. In these strategies, material is used so that its original state is still evident, while some previously neglected property is given primary value. Often, this is done by fragmentation, discontinuity of scale and medium, and change of context. Collage, found objects and assemblage are procedural rules in an aesthetic domain, but the principles extend to bricolage and the ad hoc in the functional domain. Here, objects and materials are used to enable the constructed thing to work, not through efficiency or elegance, but through the exploitation of (usually) the least obvious property of the source material.

But bricolage and the ad hoc appear to be only feasible when the designer and the maker are the same person. During construction of the Wunderlich installation, the architects were on site as part of the construction team. This is unusual: generally in architecture, the designer is not the fabricator or maker. The acceptance of bricolage and the ad hoc establishes a whole area of experimentation and innovation for matters of professional practice. There are instrumental issues such as cutting patterns, sequence of assembly, margins of error to be predicted, and accurate survey and classification techniques for the creative use of existing materials and objects. At an architectural level, there are the issues of how these new ways of valuing materials can become part of the architectural composition, how they can improve the workings of the architecture at all levels.

Theoretically, pure installations cannot be relocated like a framed painting or freestanding sculpture. This installation by PHOOEY will be. Its material origin is in the abundance of carpet tiles. At the end of the exhibition they will be removed and used elsewhere, and possibly not as flooring. While tattooed with images of PHOOEY’s architecture, the tiles are a real here-and-now materialisation of the architects’ strategies. The tiles set the questions and provide a context in which PHOOEY’s built work can be considered, but the true nature of this exhibition will only be evident when the carpet bits are taken away, re-used, perhaps separated into a number of subsequent locations and projects. This could happen for some time and across many locations. In the meantime, there is the pleasure and provocation of walking across and touching material and idea, and pondering the digital structure of both carpet and picture.